Jewellery is an emotional bond, a connection and a piece of art whose emotional value and worth far outweighs its price. We understand this and hence create timeless masterpieces. Our collections are imaginatively conceptualized and creatively designed to retain the classicism while infusing the jewellery with freshness, vitality and a new energy that attracts good vibes and positivity. 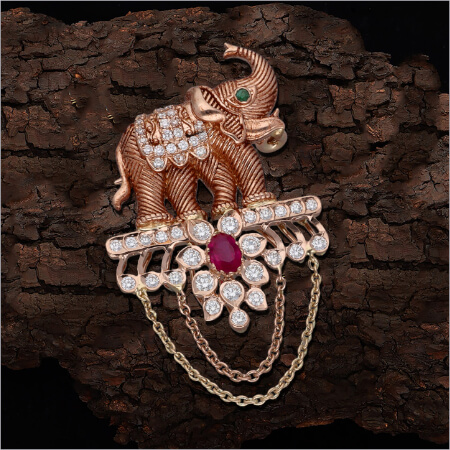 The Southern peninsula is a fortunate and blessed land, watered by stately rivers and populated with the choicest bounties of nature such as spices, many crops, and a wealth of metals such as gold, silver and diamonds. With an amazingly rich cultural history stretching back thousands of years, South India is a conglomeration of diversity which has been continually spawned powerful dynasties, energetic and enterprising merchants, hard working populations and the means of producing astonishing achievements of human endeavour- Be it in architecture such as Temples, palaces or forts, or fabrics or sculpture, cuisine or cultural traditions.

Ancient Splendour is a new technique that combines two contrasting jewellery forms to create magical new forms that look traditional but are actually cutting edge modern and modular. The ancient tradition of close setting is rendered in a new way by manufacturing these heritage infused designs with open setting technology that reduces the gold weight and pricing to the minimum while giving the rich magnificence and opulence of close setting look. The Chettinad and Karaikudi jewellery collections reflect this amalgamation of tradition and innovation best which imparts royal and resplendent invaluable jewels for an astonishingly reasonable price. 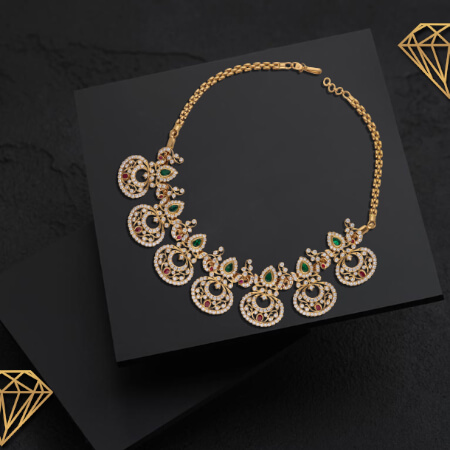 When a star burst upon a sky, a galaxy of trillion stars is born! This delight of shining stars is our inspiration for creating this wondrous collection. Uniformly cut diamonds are intricately aligned in a manner to give out a remarkable diamond spark, that radiates like a star. The intricacy and amazing virtuosity of the Indian jewellery craft is the skill that goes into combining procession with passion and marrying the most imaginative designs with the most enduring craftsmanship that well last for generations without the need of any intervention. Latest technology and modern manufacturing techniques have made the art of precision manufacturing of jewellery much more streamlined and meticulous. The need of the hour in jewellery design today is to create masterpieces of magnificence that have the look and feel of heavy and royal traditional pieces but who's actual weight is least possible with minimal manufacturing time and pricing. 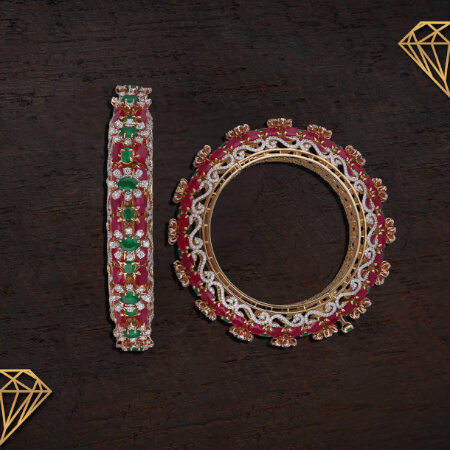 A Sunburst, a Starburst, a Garden burst, a Dream burst, A Magic burst, A Rainbow burst- Our colour stone collection can best be described as brilliant bursts of joy, Sunshine, hope, love,togetherness and the most primary and important emotions of life. This collection is not merely a conglomeration of coloured stones brought together to vivid life and beauty but a vivid expression of the joys hopes dreams aspirations and endless possibilities of life.

Some kind of flowers never wilt, those are the diamond kinds… Floral motifs across every flower in the field is designed to make one bloom with diamonds… Designed in various floral inspirations, combining the right gemstones with diamonds is truly an art of designing stunning jewellery. Since the diamond-ruby and emerald – ruby combinations have become a regular today, the team at Vijay Gems and Jewellery has curated a fabulous diamond jewellery collection interspersed with different hues, shades and moods of coloured gemstones. Diamond jewellerythat is inspired by the natural elements of the Sun, Moonlight, flower garden, field, mountains and waterfalls- This collection evokes many moods and passions each time it is worn-in both the wearer and the onlooker. 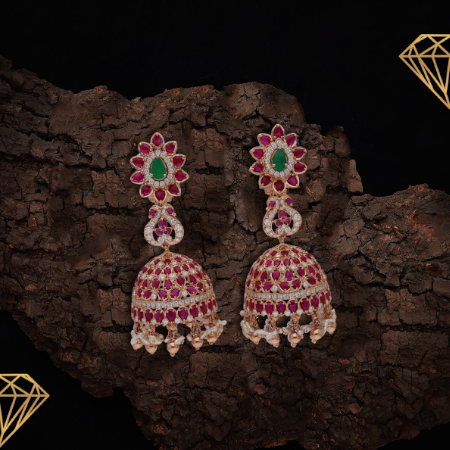 The stone of passion, playfulness and romance, Rubies are eternal and always a showstopper.

The most decadently fabulous Rubies sourced from Burma and Mozambique are placed in prima donna positions to create a symphony of such style and magnificence that has all the drama and show of a grand Italian Opera.

The Ruby collection boasts of an eclectic mix of glorious necklaces in baguette cut diamonds and defined bracelets, luscious rings and jaw droppingly gorgeous earrings to flaunt at every occasion. The beauty of rubies lies in theirbrilliant colour that goes so naturally with every skin tone, making each bauble just part of the wearer's persona.

A thing of beauty is a joy forever…

Just like Prince Charming must pass through a maze of obstacles before he can claim the glittering prize of the eternal love of the Princess Fair, so each of our piece travels through many phases before it emerges as a ‘piece de resistance’ which will lure and allure all and adorn the most discerning and tasteful buyers to attract every eye and instill the joy that true beauty brings. 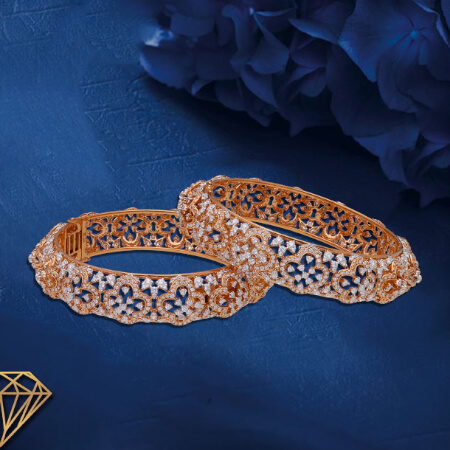 Just like one can open a window to the outside world and relish it in all its colours and shades, bangles and bracelets can also elevate any look to the zenith of stunning grace, sophistication and subtle seduction. 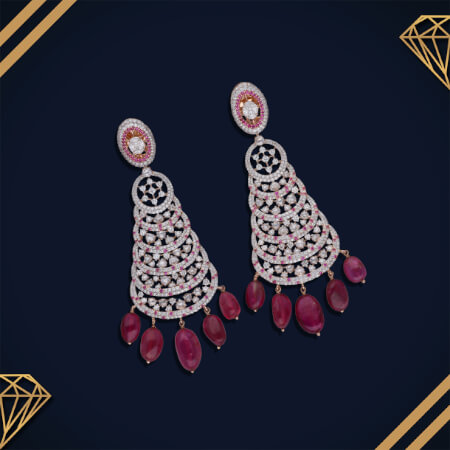 A delightful woman's beauty will always be multiplied manifold with the proper jewellery, whether bathed in sunshine during the day or moonlight at night...and earrings are any woman's best friends… and if they are diamonds and gems…less is more and more is even more! 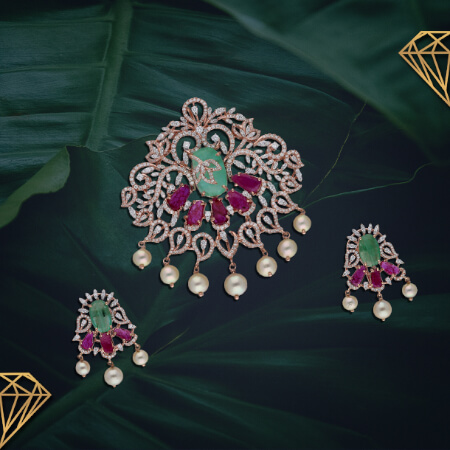 A woman's allure is further amplified by the addition of the right resplendence and jewellery… Regal and delectable jewellery like not only enhances beauty, it also multiplies a woman's confidence, charisma, attraction and her sense of self. 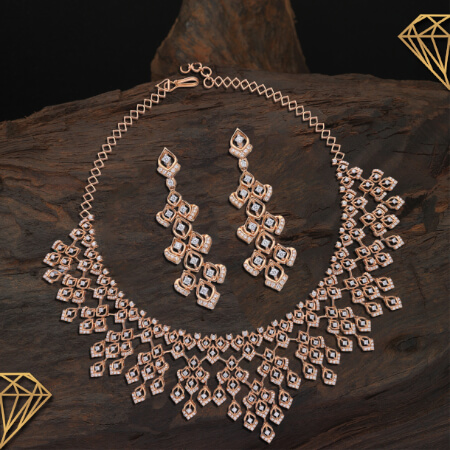 When the occasion calls for something exceptional to make it even more special, only the best in classic jewellery with a contemporary twist makes the cut…choose from an amazing kaleidoscope of designs to dazzle everyone on any occasion. Our bridal and occasion wear collections are sure to bewitch and enthrall even the most jaded heart.